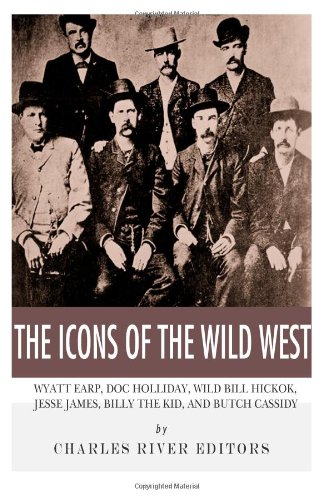 Includes pictures of important people, places, and events. Discusses the legendary deaths of Wild Bill, Jesse James, Billy the Kid, and Butch Cassidy. Discusses the myths and legends surrounding their lives and legacies. Space may be the final frontier, but no frontier has ever captured the American imagination like the "Wild West", which still evokes images of dusty cowboys, outlaws, gunfights, gamblers, and barroom brawls over 100 years after the West was settled. A constant fixture in American pop culture, the 19th century American West continues to be vividly and colorful portrayed not just as a place but as a state of mind. Among the cowboys and outlaws, the 6 most famous men included those (mostly) on the side of the law (Wild Bill, Wyatt Earp & Doc Holliday), and the era's most famous outlaws (Jesse James, Billy the Kid and Butch Cassidy). Though they were on two sides of the law, many of them had things in common. Of all the colorful characters that inhabited the West during the 19th century, the most famous of them all is Wyatt Earp (1848-1929), who has long been regarded as the embodiment of the Wild West. Considered the "toughest and deadliest gunman of his day", Earp symbolized the swagger, the heroism, and even the lawlessness of the West, notorious for being a law enforcer, gambler, saloon keeper, and vigilante. Wild Bill Hickok headed west as a fugitive of justice, yet that didn't prevent him from becoming a frontier lawman in Kansas, like Wyatt Earp. Hickok also became well known in the West for being a professional gambler and a remarkably quick draw who proved quite deadly in shootouts, like Doc Holliday. When he was killed while playing poker in the mining South Dakotan outpost of Deadwood, he put Deadwood on the map and ensured both his place and his poker hand's place in legend. The man who has earned an enduring legacy as the region's quirkiest is John Henry "Doc" Holliday (1851-1887), a dentist turned professional gambler who was widely recognized as one of the fastest draws in the West. In fact, the only thing that might have been faster than the deadly gunman's draw was his violent temper, which was easily set off when Holliday was drunk. By the early 1880s, Holliday had been arrested nearly 20 times. Holliday's quirks and sense of humor made him much like Billy the Kid, who had a bullet and a wisecrack for every man he killed. Billy's notoriety only grew when exaggerated accounts of his actions in Lincoln County eventually earned The Kid a bounty on his head. There was plenty of gunplay in the outlaw's life to help him become a well known if not celebrated figure in the West, but the legendary and controversial nature of his death has also helped him endure. The two best known robbers of the Wild West were Jesse James and Butch Cassidy. Like Wild Bill Hickok, Jesse James was a celebrity during his life. However, while Hickok was (mostly) a lawman, Jesse James was and remains the most famous outlaw of the Wild West, with both his life of crime and his death remaining pop culture fixtures. Alongside Jesse James, Butch Cassidy is one of the most notorious outlaws of the west. Though he is commonly associated with the Sundance Kid, the duo had a full-fledged gang known as the Wild Bunch conducting robberies in the Southwest, and they became legendary for their shootouts and their escapes from the law. Like Jesse James, his mysterious death and conspiracy theories that he survived continue to linger. The Icons of the Wild West chronicles the amazing lives and legacies of all 6 Western legends and discusses the facts and legends that continue to make them household names. Along with pictures, you will learn about the Icons of the Wild West like you never have before.
Show More
Reviews