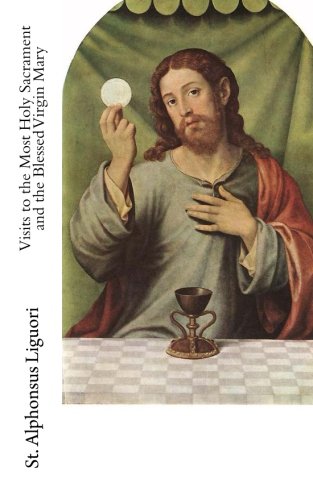 Our holy faith teaches us, and we are bound to believe, that in the consecrated Host, Jesus Christ is really present under the species of bread. But we must also understand that He is thus present on our altars as on a throne of love and mercy, to dispense graces, and there to show us the love which He bears us, by being pleased to dwell night and day hidden in the midst of us. It is well known that the Holy Church instituted the Festival of Corpus Christi with a solemn octave, and that she celebrates it with the many usual processions, and such frequent expositions of this Most Holy Sacrament, that men may thereby be moved gratefully to acknowledge and honor this loving presence and dwelling of Jesus Christ in the Sacrament of the Altar, by their devotions, thanksgivings, and the tender affections of their souls. O God! how many insults and outrages has not this amiable Redeemer had, and has He not daily, to endure in this Sacrament on the part of those very men for whose love He remains upon their altars on earth! Of this He indeed complained to His dear servant Sister Margaret Alacoque, as the author of the Book of the Devotion to the Heart of Jesus relates. One day, as she was in prayer before the Most Holy Sacrament, Jesus showed her His Heart on a throne of flames, crowned with thorns, and surmounted by a cross, and thus addressed her: “Behold that Heart which has loved men so much, and which has spared Itself nothing; and has even gone so far as to consume Itself, thereby to show them Its love; but in return the greater part of men only show Me ingratitude, and this by the irreverences, tepidity, sacrileges, and contempt which they offer Me in this sacrament of Love; and that which I feel the most acutely is, that they are hearts consecrated to me.” Jesus then expressed His wish, that the first Friday after the Octave of Corpus Christi should be dedicated as a particular festival in honor of His adorable Heart; and that on that day all souls who loved Him should endeavor, by their homage, and by the affections of their souls, to make amends for the insults which men have offered Him in this Sacrament of the Altar; and at the same time He promised abundant graces to all who should thus honour Him.
Show More
Reviews

Visits to the Most Holy Sacrament and the Blessed Virgin Mary