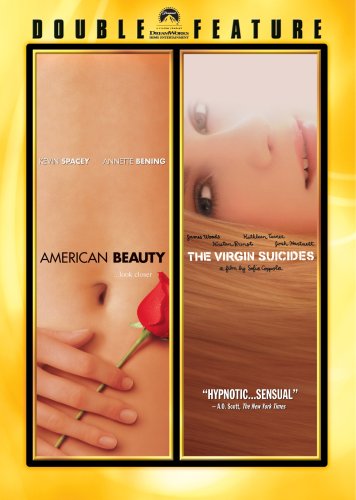 Brand : Paramount Home Video
from USA
to South Africa
in 5-8 days
At your doorstep by Jun 22  to Jun 25 with standard delivery

AMERICAN BEAUTY: Noted theater director Sam Mendes, who was responsible for the acclaimed 1998 revival of Cabaret and Nicole Kidman's turn in The Blue Room, made his motion picture debut with this film about the dark side of an American family, and about the nature and price of beauty in a culture obsessed with outward appearances. Kevin Spacey plays Lester Burnham, a man in his mid-40s going through an intense midlife crisis; he's grown cynical and is convinced that he has no reason to go on. Lester's relationship with his wife Carolyn (Annette Bening) is not a warm one; while on the surface Carolyn strives to present the image that she's in full control of her life, inside she feels empty and desperate. Their teenage daughter Jane (Thora Birch) is constantly depressed, lacking in self-esteem, and convinced that she's unattractive. Her problems aren't helped by her best friend Angela (Mena Suvari), an aspiring model who is quite beautiful and believes that that alone makes her a worthwhile person. Jane isn't the only one who has noticed that Angela is attractive: Lester has fallen into uncontrollable lust for her, and she becomes part of his drastic plan to change his body and change his life. Meanwhile, next door, Colonel Fitts (Chris Cooper) has spent a lifetime in the Marine Corps and can understand and tolerate no other way of life, which makes life difficult for his son Ricky (Wes Bentley), an aspiring filmmaker and part-time drug dealer who is obsessed with beauty, wherever and whatever it may be. THE VIRGIN SUICIDES: A dark comedy punctuated by moments of drama, The Virgin Suicides explores the emotional underpinnings of a family starting to come apart at the seams in 1970's Midwestern America. The Lisbons seem like an ordinary enough family; Father (James Woods) teaches math at a high school in Michigan, Mother (Kathleen Turner) has a strong religious faith, and they have five teenage daughters, ranging from 13-year-old Cecilia (Hannah Hall) to 17-year-old Therese (Leslie Hayman). However, the Lisbon family's sense of normalcy is shattered when Cecilia falls into a deep depression and attempts suicide. The family is shaken and Mother and Father seek the advice of psychiatrist Dr. Hornicker (Danny DeVito), who suggests the girls should be allowed to socialize more with boys. However, boys soon become a serious problem for Cecilia's sister Lux (Kirsten Dunst). Lux has attracted the eye of a high-school Romeo named Trip (Josh Hartnett), who assures Father of his good intentions. But Cecilia finally makes good on her decision to kill herself, throwing the Lisbons into a panic; and after attending a school dance, Trip seduces and then abandons Lux. The Lisbons pull their daughters out of school, as an emotionally frayed Mother keeps close watch over them. Meanwhile, Lux continues to attract the attentions of the local boys, and she responds with a series of clandestine sexual episodes with random partners as often as she can sneak out of the house. The debut feature from Sofia Coppola (whose father, Francis Ford Coppola, co-produced this film), The Virgin Suicides also features supporting performances from Scott Glenn and Giovanni Ribisi. The film was shown as part of the Directors Fortnight series as the 1999 Cannes Film Festival.
Show More
Reviews